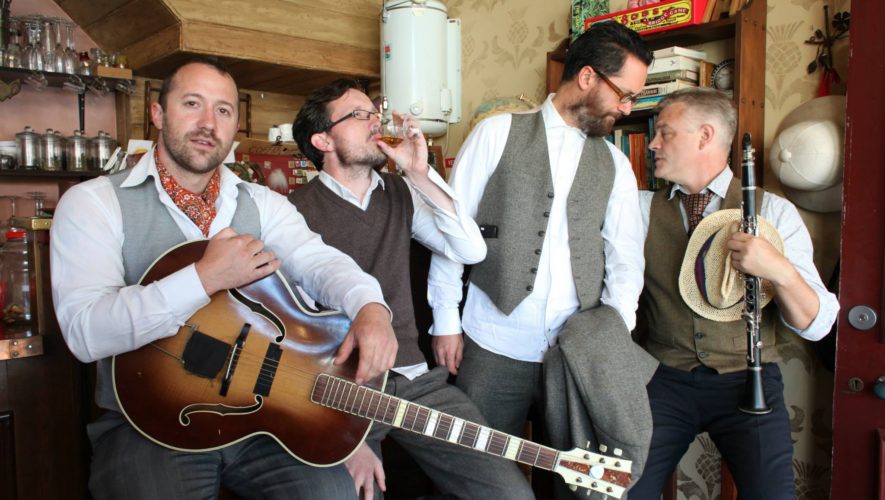 The Dancing and Drinking Society have been bringing their swing/blues and jazz sounds to dance floors and craft beer bars across the capital since late 2013.

When they take to the stage, guitar, horns, vocals, and kick drum blend as The DADS present their favourite old rarities with exactly the sort of vigour you want for some stress-relieving dance times.

They’ve cultivated a reputation for generous and openhearted live performances. You’ll love their sound and find it hard not to want to dance.

The DaDS consist of:

Adrian Jensen (guitar, banjo, kick drum, washboard) started playing in Wellington in 2011, as a guitarist for Black Spider Stomp and The Roseneath Centennial Ragtime Band. His skills on guitar and banjo are complimented by his drumming skills on kick drum and washboard. He draws from the Gypsy Jazz style of Django Reinhardt and early jazz and blues.

Mat Enright (vocals, trumpet, guitar) studied trumpet at Ara, the Christchurch Music Institute before moving to wellington in 2011. However, he wished to develop his skills with guitar and vocals. In 2013, he set himself the challenge to play 365 solo gigs in 365 days, which he not only successfully completed, but exceeded. He plays in many bands and is also a member of the acclaimed Newtown Rocksteady. He is particularly inspired by the early blues styles of guitar playing, and the trumpet styles of Bix Beiderbecke and Louis Armstrong.

Nils Olsen (clarinet, saxophone, vocals) has seen 35 years of playing music professionally in New Zealand and Germany. He has played on cruise ships, for live TV, traveling shows and touring musicians such as the Black Seeds, Ray Charles, Kiri Te Kanawa, the Finn Brothers, Ronan Keating and The Platters. He has won a Tui award for Best Jazz Album with NZ jazz group, CL BOB. He has a Bachelor of Music from Otago, and an Advanced Diploma of Music from Wellington Polytechnic.

Dan Yeabsley (tuba, hi hat) has been a pillar in the Wellington music scene since the mid 1990’s and been in great bands such as Twinset, The Black Seeds, and Fat Freddys Drop. As well as an accomplished saxophonist, Dan is also one of the top double bass players in Wellington. In The Dancing and Drinking Society though, his main pick is the tuba. He has a Bachelor of Music in Performance from Massey University.