Jazz in Martinborough (JIM) is a community-based enterprise that provides quality jazz music events to promote local and NZ jazz artists and benefit a local community cause or charity.

JIM’s major event is its annual jazz festival, which is usually held at the beginning of spring and includes both ticketed concerts and many free gigs at local bars, cafes and other venues in Martinborough. JIM also helps to develop young jazz talent through its College Jazz Showcase (‘FreshJam’), which is held a few weeks before the festival at Kuranui College in Greytown.

Check out our Anthology section to find out more about what we have done over the years and join our mailing list to keep posted on what we are planning for the future.

The Story of JIM

Jazz in Martinborough (JiM) was founded by local identity Ian Cresswell in the winter of 2011.  The story of how it all happened is written below, in his own words. Thank you Ian!

The 99-year-old Martinborough Town Hall was the trigger. In the winter of 2010, an Australian trad jazz band, Dixie Street, was thinking of including Martinborough in a Spring tour of the North Island, planned for the following year. Would the old Town Hall be available on 20 August 2011? 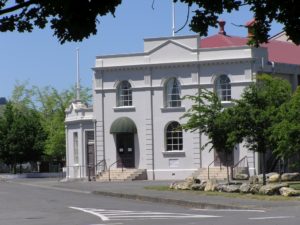 Surely it must be (so far ahead!) and indeed it was. So a booking was made and a major jazz appearance was secured for South Wairarapa. Rod Andrew of Dixie Street wrote, “Thanks for the opportunity to bring some great entertainment to your lovely old Town Hall.”

As Chairman of the Town Hall Committee, I sensed a fund-raising opportunity and floated the idea of a small spring jazz festival. Although this notion didn’t immediately gain traction, the principal of Dixie Street, Rod Andrew urged me to have a go.

A chat with Martinborough’s jazz-minded Ted Preston and he was on board, quickly followed by another jazz fan, Lee Quayle. The main organisers were in place! Many locals were quick to follow.

By this time, having been to Christchurch again, I had become aware that their Jazz School had been off limits in the Red Zone since the 22nd February earthquake. The school couldn’t function and most jazz venues in the city had closed down, or fallen down. Where could they go out of Christchurch, and where would they play?

I knew award-winning 18 year-old Christchurch jazz pianist Nick Dow and, with his contacts, we soon had four young Christchurch bands keen to come to Martinborough. I said the deal would be that if they could get there and back, we would accommodate and feed them and probably give them some take-home money. “A sweet deal”, they said. With the highly regarded jazz violinist Fiona Pears from Lyttelton already booked, we now had La Petite Manouche, The Low Down Collective, Nocturne, High Street Collective and Nick Dow to join with Dixie Street. Enough for a small festival!

Quite soon, the wine village was buzzing with talk of Jazz in the Spring: come to the JIM! Every cafe and pub would have a gig and the Town Hall would be ablaze. Every business approached us, and many individuals, wanting to donate or help. Food? Wine? Fruit juice? Beer? Colour copying? Not a problem!

The Martinborough Hotel offered their entire accommodation free of charge to the earthquake-struck jazz players. An up-market lodge and several homestays did the same.

A boutique jazz festival was born!

Ian Cresswell (1934-2017) Founder and Producer of Jazz in Martinborough