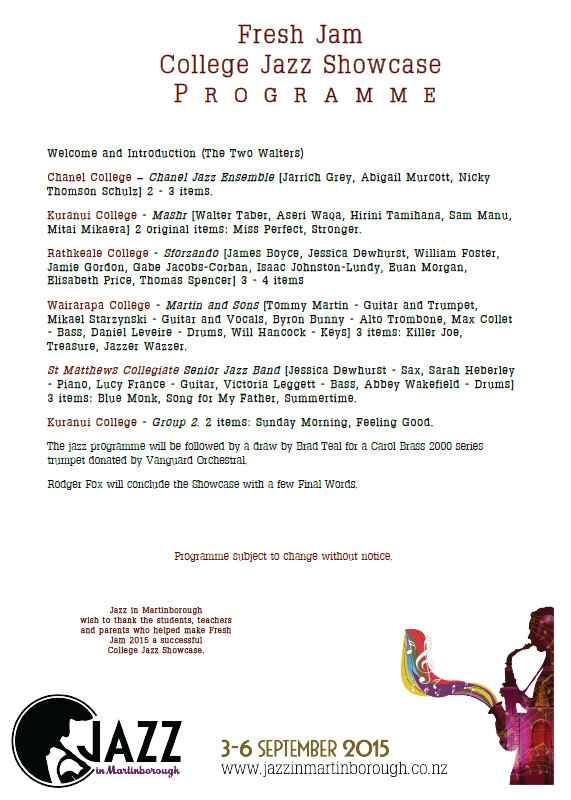 A pair of Kuranui College students were backstage, onstage and front of stage during the 2015 Fresh Jam.

Multi-instrumentalist Walter Taber, who plays guitar, piano and “a bit of trumpet – but not all at the same time” – performed and acted as MC for the college jazz section of the annual event; while Dylan Taylor, who plays drums, guitar and bass, helped to run lights and audio at the same event.

About 40 students from colleges throughout Wairarapa took lessons at the workshop before they took to the stage to test their talents and tunes. It was the first time a workshop had been held ahead of the Fresh Jam performances “and it was really good, Rodger was a great guy”, the two young musicians said. Dylan was attracted to jazz as a genre, he said, because “it’s different from what most younger people listen to. I get sick of listening to the same old modern, pop stuff”, he said.

Walter, who was grade 8 in classical piano and working towards his ATCL recital diploma, said he preferred rock and metal but welcomed jazz as a change that demanded a different sensibility. “I guess that’s why I’m so into rock and metal because it’s different from classical; and jazz, because it’s different again, and it takes you away from the old 4:4.” Dylan said the complexity of jazz helped him as a student musician by “getting me thinking, and making my own stuff”.

The pair had also played in their pop rock college band, Before Sunrise, and competed in the Wairarapa finals of Smokefreequest, walking away with the prize for best song with their original composition, Stick Around.