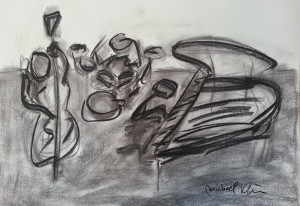 Int2ition are a fresh new sextet of developing jazz musicians from the New Zealand School of Music.  They are led by saxophone and woodwind tutor Alex Nyman.

Presenting a program consisting of jazz standards both old and new with a highly dynamic approach that will keep the audience rapt from first note to last. From golden vocal classics to upbeat funky contemporary this group has it all.

Chris Beernink (Bass) – Recently finishing his master’s degree at the Te Kōki New Zealand School of Music (NZSM), Chris Beernink is a professional musician based in Wellington. As well as playing various concerts and gigs of various styles around Wellington, Chris is a member of the Royal New Zealand Air Force Band, playing both double and electric bass in the main concert band and jazz orchestra.

Nicholas Baucke- Maunsell (Saxophone) Nicholas is currently studying at the New Zealand school of music, he has been lucky to play in the nz youth jazz orchestra alongside guests artist such as Alex Sipiagin and Tom Leur.