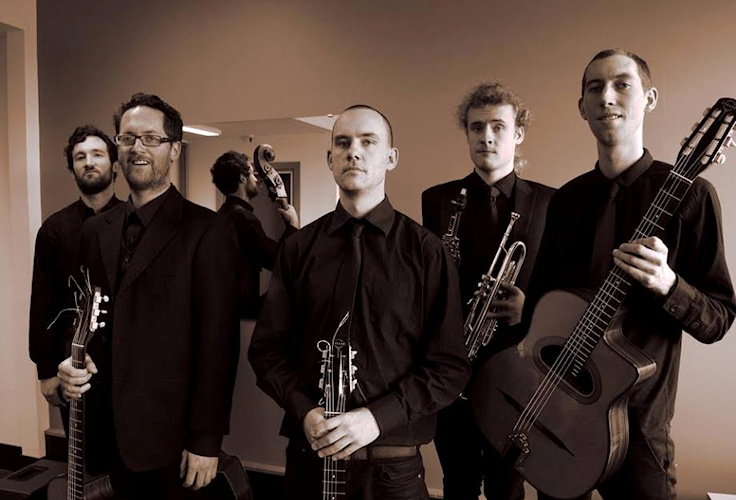 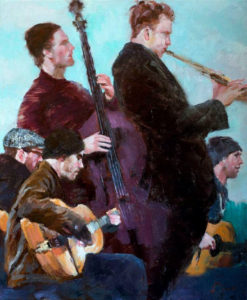 Start Jazz in Martinborough 2016 with an exciting and exhilarating performance from a bunch of masterly Gypsy Jazz musicians.

They also play vibrant re-imaginings of classic jazz by Louis Armstrong, Sidney Bechet, Django Reinhardt and many others.

Constantly evolving and releasing new material, Black Spider Stomp are definitely one of the most exciting gypsy jazz entities to come out of New Zealand.

An eclectic saxophonist and multi-instrumentalist based in Wellington, New Zealand. A frequently-appearing personality in the Wellington jazz scene, Laven is a busy full time performer, composer and teacher with bachelor degrees in jazz and classical performance from the New Zealand School of Music.

Adrian Jensen started playing as the rhythm guitarist for Black Spider Stomp and The Roseneath Centennial Ragtime Band in 2011. In 2013 he started The Dancing and Drinking Society with Mat Enright to explore the early New Orleans style of music. He is a predominantly self taught guitarist interested in early jazz and swing music from the 1920s, 30s and 40s.

Scot Maynard is a prominent bassist in the Wellington music scene. He has been playing with Black Spider Stomp since 2011, and also appears with Groeni, Sam Manzanza, The Lex French Quintet, The Neo Hot Jive Orchestra and many others.

Sam Thurston, co-founder of Black Spider Stomp, has written much of their original material. An experienced guitarist in a range of genres, in addition to being a highly accomplished gypsy-jazz player, Thurston runs several successful punk bands and has toured internationally across Europe and Southeast Asia.”

James Quick co-founded Black Spider Stomp with Sam Thurston over 5 years ago, and also wrote a large proportion of their original material. A polished guitarist in gypsy-jazz, straight-ahead jazz, punk music and more, Quick has done multiple international tours, and is now juggling music with being a father to his 2-year-old son.