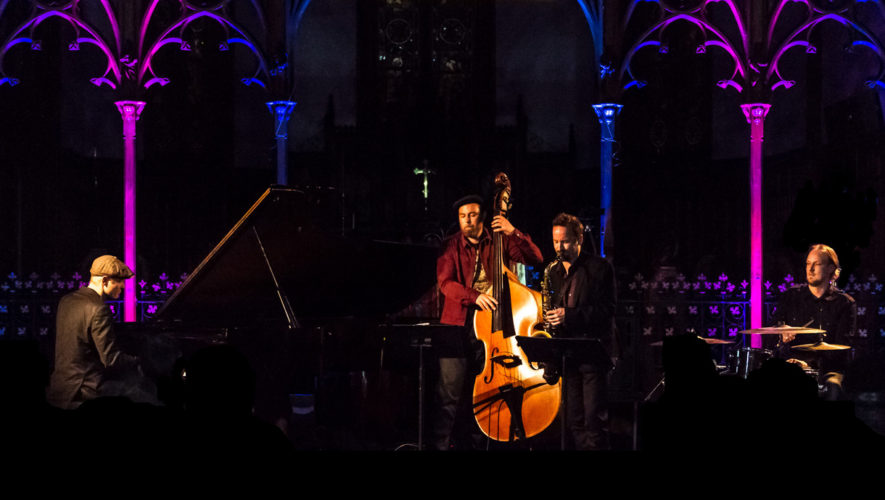 The Nigel Patterson Quartet was formed in 2007 out of a love for jazz and a vision for composing and performing original jazz inspired compositions.

Inspired by such greats as Thelonious Monk, Duke Ellington, Mal Waldron, McCoy Tyner and many others the NPQ creates a contemporary, sophisticated and digestable take on the jazz idiom.

From alternative metres through mood ballads and up-tempo swings, the NPQ seeks to bring through the edgier side of jazz while retaining the melodic and emotional character of the music.

The Nigel Patterson Quartet consists of:

Nigel Patterson (keyboards) graduated from Massey University Conservatorium in 2003 with a BMUS in Jazz Piano Performance, and has established himself as one of NZ’s most highly-regarded keyboard players and composers. He has performed in many different contexts from boutique venues to stadiums in NZ, Australia, Europe and USA.

Nigel also performed with Anthony Donaldson as a member of The Flower Orphans and Village of the Idiots at the 2006 and 2007 Wellington International Jazz Festivals, at the latter of which he also appeared with The Nigel Patterson Trio.

Blair Latham (tenor saxophone) is known for his powerful, driving sax sound and recently appeared at the 2017 Wellington Jazz Festival with The Little Blast Orchestra and the Jazz Robots.

A saxophonist, composer and multi-instrumentalist with a deep love of the bass clarinet Blair began his musical journey towards becoming a unique voice in NZ Music in his hometown of Wellington over 25 years ago. Fortunate enough to be interested in making sounds by blowing through a piece of metal at a time when such luminaries as Jeff Henderson were fomenting a truly vibrant creative music scene, he took full advantage. A number of years living and working in Mexico and the US have added an appreciation of what music is to people of varied cultures and perceptions of life, something that shows through in his performances and musical organising.

Peter Elliott (drums) ascended from the masterful teacher Chris O’Connor and also from renowned NZSM tutors Roger Sellers and Lance Phillip. Since starting at the age of 14, Peter has continued to develop his skills for the past 16 years and is able to elaborate on all sorts of styles and techniques, including: Jazz, Rock, Afro-Cuban, Brazilian, Funk, Soul R&B, Hip Hop, Drum n Bass, Electronic and many more.
Peter gained a Bachelor of Music in Jazz Drumming (2003 NZSM) and has maintained a creative and innovative teaching style both privately, and at Schools over the past 10 years such as Wellesley College, Onslow College, Wainuiomata College and St Marks Church School and Samuel Marsden Collegiate. Currently performing in multiple bands and Jazz collaborations, Peter regularly takes part amongst NZ’s Jazz Festivals recently playing in the 2016  Wellington Jazz Festival  with The Nigel Patterson Quartet and The Jazz Robots.