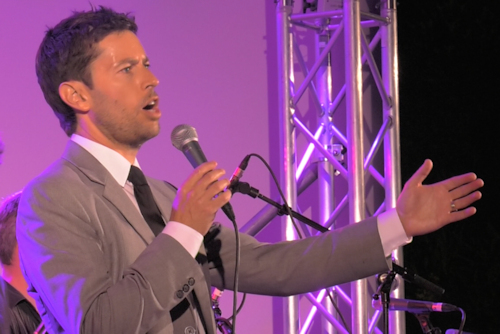 Based in Wellington, Steve Carlin has emerged as one of the most exciting crooners in New Zealand, with a rich baritone voice that captures the essence of the swing era vocalists. For the best part of a decade he has been entertaining crowds across Australasia with his ‘Songs from the Swing Era’ repertoire, performing the hits from the likes of Frank Sinatra, Dean Martin, Nat King Cole and co. Steve was brought up on a musical diet of Glenn Miller, Louis Armstrong and Ella Fitzgerald, all influences of his father’s record collection. It is unsurprising then, that his musical education would lead him from piano, to drums, and eventually to singing jazz which had been so much a part of his youth.

Steve has performed at numerous festivals and events all over the country and as far afield as Germany, proving his appeal as a seasoned entertainer. His style and lush vocal textures unerringly bring to life the classic songs, and reignite the audiences’ love for the music of the magical swing era. Let Steve entertain you with all those wonderful hits, from Mack the Knife to That’s Life…New York, New York…and more!